In 2003, Eidos Interactive began branching out to mobile phone devices, releasing goodies such as Tomb Raider: The Angel of Darkness ringtones and logos. This also marks the release of Lara Croft's first adventure on mobiles, the first game being 'Tomb Raider: The Osiris Codex', a java game.

In later years, mobile games became more operating system based rather than depending on the model of mobile phone and so these types of mini games died out - however, they are still available for download from the Internet and can still be played with an emulator.

For the last week, the newspaper headlines have all been about the daring theft of the Leydon Papyrus, an early Egyptian work on chemical processes. Lara now receives an anonymous commission to retrieve a mysterious relic, the Osiris Codex, from a recently uncovered tomb. Surely there is a connection? The stolen manuscript is the earliest record of ancient Egyptian metallurgy, and Osiris (The Egyptian god of resurrection and eternal life) has always been inexorably linked with alchemy...
​
Run, jump, climb, shoot and think your way through a variety of levels, watching out for the traps, obstacles and enemies that will inevitably hinder your progress as you travel deeper underground in your search for the fabled treasures of Egypt.

In the first episode Lara received a commission to retrieve a famous Egyptian work, "The Osiris Codex". On returning from Egypt with the fabled manuscript, Lara finds that her anonymous employer wishes her to travel immediately to Tibet.

Her destination is a nameless ancient monastery, which sits high on an escarpment. Lara must secure a priceless ancient vase containing Cinnabar, a substance used in the creation of life affirming tinctures. Lara Croft is well aware that the supposedly mythical city of Shangri-La is actually rooted in Tibetan folklore, which describes a remote valley inhabited by immortals.
​
Could this legend be linked to her latest adventure?

Tomb Raider: Elixir of Life is the final part of a 3-episode adventure featuring Lara Croft. In the first episode Lara received a commission to retrieve a famous Egyptian work, "The Osiris Codex". She followed this with a trip to an ancient Tibetan monastery to recover a vase containing Cinnabar, a substance used in the creation of life affirming tinctures.

Suspicious of her employer’s motives, Lara thinks someone is trying to gather together the ingredients to formulate the fabled Elixir of Life. She may be skeptical of its actual potential, but nonetheless Lara is still reluctant to hand over the artifacts she has recovered. Instead she decides to discover for herself the real intentions of her clandestine employer.
​
Lara’s investigations lead her to the Scottish castle home of a billionaire recluse and inside she discovers a private museum big enough to rival that of any nation. Her suspicions are proved right; the secretive curator’s intentions are far from innocent. Lara Croft must overcome state of the art security systems and an army of lethal defense robots before she can stop the maniac from realizing his plan.

As the name suggests, this is your chance to play a hand of poker with Lara, as well as some other Eidos characters such as Gex and Agent 47.

​Lara’s back, and this time she’s faced with her most taxing adventure to date.  The plucky explorer must use her logical skills to complete a series of addictive puzzles based on the Tomb Raider: Legend story. During this Journey she will encounter deadly traps, darkened tombs and complex ancient locking mechanisms; all of which must be tackled under severe time constraints.

In ‘Trapped’ Lara must manoeuvre gems in order to disarm the surrounding traps and continue. Each quad should contain one of each colour gem, as should each row and column.

‘Illumination’ places the adventurer in a darkened tomb; Lara must manipulate light using splitters, double sided mirrors and teleports in order to light the way ahead.

Finally, ‘The Vault’ is a complicated ancient lock which must be deciphered. Match either colour or symbol to that of the centre rune to disperse each rune to its corresponding storage sphere and solve the puzzle.

Seeing is Believing
This 3D game follows the story of Tomb Raider Legend, the new title in massive Tomb Raider Franchise. Developed using ground breaking 3D technology; it’s a 3rd-person action-adventure game with an event-driven story & some of the most immersive 3D graphics ever seen in a mobile game.
The adventure takes Lara around the globe, exploring treacherous tombs and uncovering mysterious ancient artifacts. Lara Croft's search for a Pre-Incan relic changes course dramatically when she meets a dangerous figure from her past.
World-spanning adventure, intrigue & mystery - based in the real world with layers of mythology and tomb-raiding. Striking, detailed, fast-moving graphics show off high-end handset capabilities and legitimise mobile phones as gaming devices.

This game is actually made up of 15 levels from the first three TR mobile games (The Osiris Codex, Quest for Cinnabar and Elixir of Life). The story has been changed though to match the game on other consoles, and the textures have been altered to suit the location.

Tomb Raider: Underworld was a Java game available to play on mobile phones.

Join Lara Croft in a mythical journey, as she embarks on her most treacherous adventure yet. Discover an ancient world of cryptic puzzles, hidden tombs and deadly enemies as you explore the wonders of the underworld. Based on the hit console game, Tomb Raider: Underworld brings you an action packed adventure of epic proportions. Master your surroundings using acrobatic abilities and deadly combat skills to help Lara reach new heights. Can you unravel the mysteries that await her?
There are in fact two versions of the game, a 2D and a 3D version. 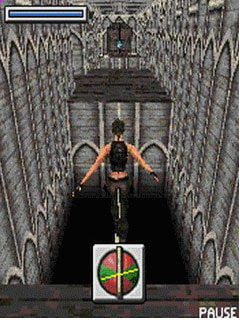 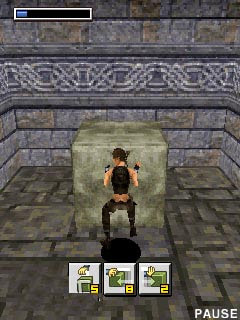 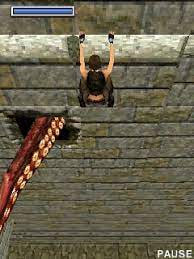